Traditional fish sauce with strong, aromatic, clean, natural flavor is an indispensable dish on every Vietnamese family’s daily meals for many generations. Making these quintessential salty drops, one has to go through many stages in a complicated process with hard works and strong enthusiasm for this smelly career.

Depending on regional weather conditions and brewing customs, each will have its own method of producing fish sauce. Currently, Vietnam has 4 main methods and processes to produce authentic traditional fish sauce:

This is a method of making fish sauce has a long tradition in Cat Ba. With fresh anchovies caught directly in Hai Phong fishing ground, then cleaned and put in well-cleaned jars. The fish will be mixed with salt, with about 20% white salt for every one quintal fish and stirred every day, it will increase the ability of salt to break down fish enzymes quickly, and shorten the maturation time. This will accelerate fermentation and prevent rot bacteria from having a chance to grow. In addition, when mixed with water, the fish will dissolve a large number of microorganisms and create a liquid environment for yeast to grow. However, we need to pay attention to the amount of water added, because if given too little, the yeast will dissolve slowly and reduce the protein of fish in the fish sauce. Therefore, according to experienced people, the amount of water put into the jars depends on the characteristics of each type of fish, usually 20-30% compared to the fish.

With this method, local people making delicious fish sauce often choose large jars to salt the fish for fish sauce. Because of its thin wall which is good for outside sun light heating, the fish will quickly hydrolyze and bring its own aroma to fish sauce. When incubated in jars, fish will be roasted and sun dried for months, then they will be transferred to drawing tanks to filter out the liquid of clean and rich fish sauce. Spent months in a ceramic jar, new fish sauce is smooth, iridescent yellow and fragrant. This is an inherited secret, a “profession”, the passionate sweat of longtime fish sauce makers. Making fish sauce is a hard job this way, it has to depend a lot on the weather. Rain or shine, we must watch to cover or open the lid of the jars to protect the inside fish sauce, to ensure a salty, slightly sweet taste on the tip of the tongue of the fish sauce, and also to keep the fish’s high protein content and healthy amino acids and minerals.

This method of sun drying and stirring has the advantage that the maturing time is faster, shortening from 12 months to about 6-8 months, if there is an appropriate temperature. But the downside is that the taste is not as strong as the method of brewing and drawing, and it requires a people with long experience because it is very easy to be faulty and spoiled.

This is the oldest method, possibly dating back more than 300 years in Phan Thiet town and then popular with Phu Quoc island fish sauce over 100 years ago. Fresh anchovies after landing into shore will be carefully selected, washed and mixed with sea salt in the ratio of 3 fish: 1 salt. That means every 3 tons of fish will be mixed with 1 ton of clean sea salt. After mixing according to the above ratio, all will be put in a wooden barrel made of local wood, reinforced by large ropes made of wild rattan.

Accordingly, will use 3 types of wooden barrels, drying barrels, mixing barrels and finished product containing barrels. The types barrels have different sizes. The smaller one, called the no.3 tank, can hold about 4 tons of fish, and the bigger one can contain 5-6 tons of fish. Particularly with these fish/salt mixing barrels, down at the bottom of the barrel, there will be a spigot to extract fish sauce drops. After we put the fish and salt mix in the wooden barrels, then spread a layer of salt on top and place a bamboo tray on the surface and put heavy stones on top, so that the fish won’t float. Due to this compacting, the internal heat in fish makes the active yeast increase, the center gradually accumulates gas NH3, CO2, H2S … making the fish swell, the fish meat is torn but the bones and skin are still intact. 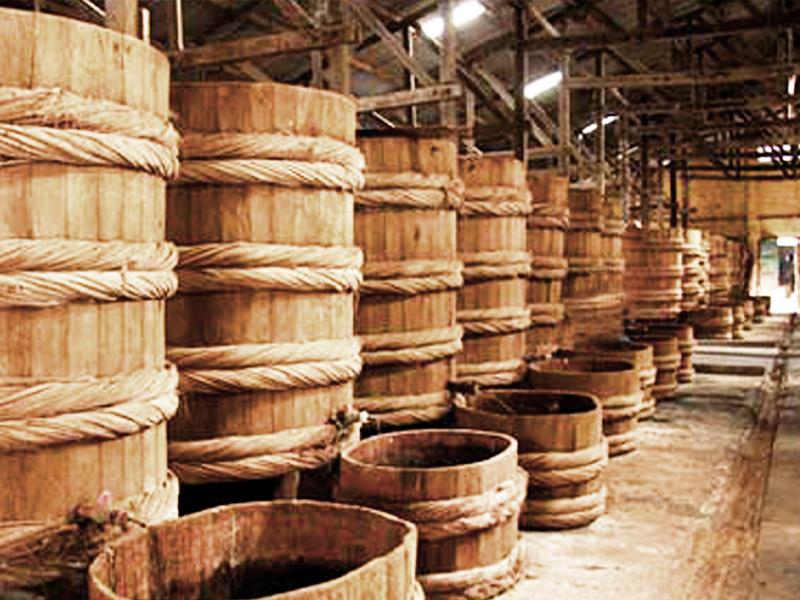 After about 3-4 days, fish sauce makers will open the spigot at the bottom of the barrel to let the fish drain. This fluid is called immature mulberry juice, containing protein from enzymes in the fish’s gut but still has a fishy smell and has not yet been ready for eating. After continuing rinsing, the fish is flat, the fish with salt is mixed again, repeating this process for 3 times to bring out the older aged liquid. This liquid is to be aged for 6 months and then pour back into the fish tank. The next round of fish sauce to be drained from the tank is called the long aged fish sauce. Then this water will be added to other fish barrels to increase the protein. These barrels were salted at the same time, and have been incubated for the same length of time. The final liquid goes through the barrels will be the finest, most delicious fish sauce.

Fish sauce is brewed and pressed in this method, the time required will be longer, usually takes from 12 to 24 months, but the taste of the fish sauce is richer, more fragrant and sweeter. This will bring dark brown color to the fish sauce with less rotten protein, thus of higher quality.

This maturation method is popular in coastal provinces such as Phan Thiet, Phu Quoc, Nha Trang. But depending on the type of fish used to brew, the fish sauce will be straw yellow or the color of the cockroach wing.

This is a combination of brewing, sun drying and stirring, and is widely used by people in the North and Central region (with unfavorable weather temperature and midst conditions). Accordingly, people will draw the liquid from the mix and then to dry in the sun, pour it back into a barrel or in a jar, then follow the brewing and pressing method as above. Fish sauce produced this way will have a darker color because of being exposed to sunlight.

This is a relatively new method compared to the three old methods above. Helping people to produce traditional fish sauce less strenuous and shorter time, but still retain the natural flavor and quality of fish sauce.

Also starting with fresh fish being saturated with salt in the storage tank, on day 3, makers will open the valve to allow water to penetrate the filter layer, flowing out of the tank. Then, pump the water from the tank to the exposing unit, and customize the valve so that the amount of water is flowing in just enough, suitable for the outdoor temperature. Being exposed to sun heat, the temperature is accumulated in the water stream in the exposure system and poured into the tank through the perforated plastic pipes in the form of a small spray. 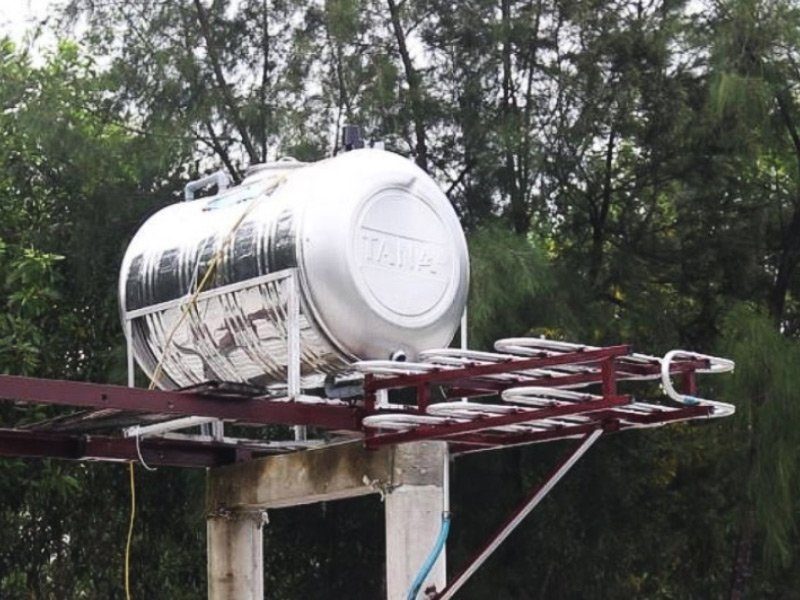 The process of maturing like this has reversed the amount of water in the muzzle, after a while the temperature of the tank is raised, reaching the appropriate temperature to be fermented to produce fish sauce. From the first month to the second month, people have to stir 2: 3 times / day (for sunny days). From the third month onwards, it must be stirring 1: 2 times a day. Thanks to the improvement of some stages such as filling, drawing by drying method, the fermentation process took place faster, shortening the maturation time. But still retains the natural flavor of traditional fish sauce.

“Tin” fish sauce – a brand of fish sauce that is produced by the traditional method of brewing – drawing. Over 12 – 24 months being long brewed from large, fresh and pure anchovies, it produces highest quality drops of pure fish sauce. Tin fish sauce has yellow brown color, delicious taste, thick and condensed of fish and gives natural sweet aftertaste with protein level up to 41N.

See the article Origin of fish sauce – Who invented fish sauce? at: https://nuocmamtin.com/en/who-invented-fish-sauce/