Phan Thiet fish sauce today has always preserved the inherent tradition in every drop of this pure and delicious seasoning, despite having gone through many ups and downs in 300 years history of the fishing village in the Central area of Vietnam.

What To Say About Phan Thiet Traditional Fish Sauce? 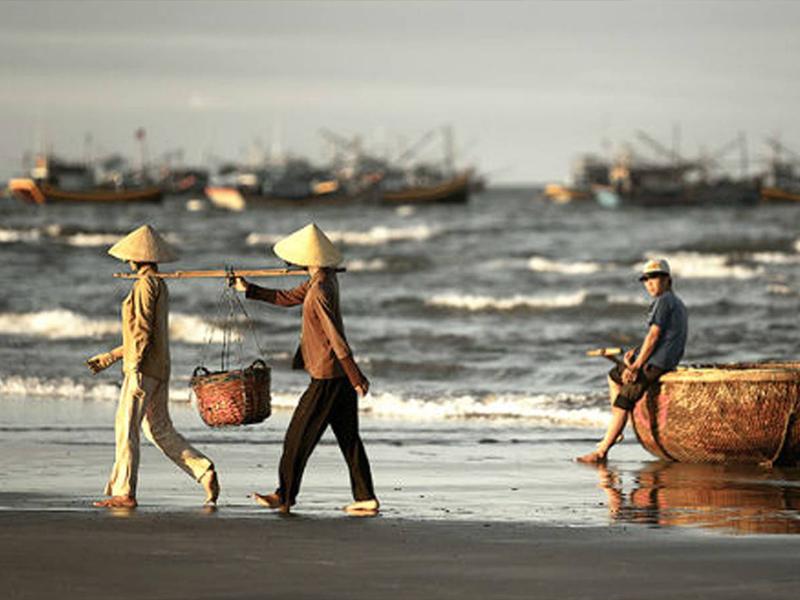 First, it is about the history of the fish sauce village of Phan Thiet, which is famous for being endowed with nature, many beautiful scenes with a rich source of seafood, this place also attracts many tourists. This is because there are so many delicious dishes coming from the fresh seafood available. Along with that, one of the things that visitors always remember about Phan Thiet is its famous fish sauce flavor. In addition, Phan Thiet fish sauce has always been in the top of the most famous fish sauce brands throughout Vietnam, reaching out to neighboring Asian countries.

Therefore, it will be really regrettable if you only come to Phan Thiet for sightseeing or relax and then return, you will never know what interesting things you have missed until next time to Phan Thiet. So if you are tired of familiar places, to refresh your trip, try visiting the famous fish sauce village here, and be sure to go to the first and only Fish Sauce Museum in Vietnam. During one hour visiting the museum you will learn more about the profession of making fish sauce in Phan Thiet, knowing that the traditional fish sauce has been around for nearly 300 years, formed in the 18th century, this is also the profession that helped the village fishermen survived through tough time.

Do You Know How To Make Fish Sauce? 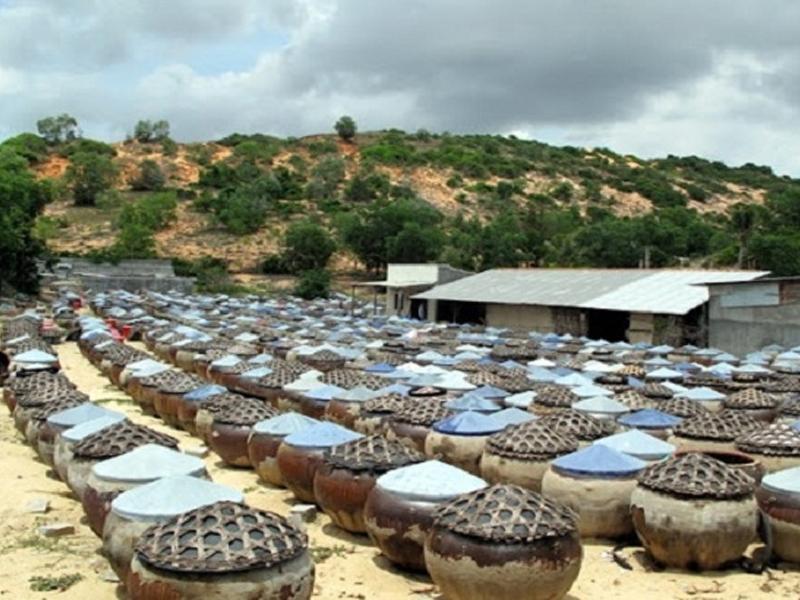 Initially due to the large amount of fish caught, each fishing boat brought back from 10 to 20 tons. Because they cannot be consumed all at once, fishermen have used salt to preserve it for later use. They unexpectedly discovered that keeping fish with salt creates a rich flavor liquid that people can eat well with rice. In your mind, when thinking about fish sauce, you will probably think of something as simple as just fish and salt, keeping in sufficient time to be finished, right? Actually, it’s not that easy, workers need to be very careful in each stage of preparation, maturation, and finished products judging. The process of selecting ingredients is also a very strict thing to be able to decide whether fish sauce is delicious and nutritious enough, of quality or not.

Usually the main raw material to produce Phan Thiet fish sauce is the black or silver anchovy. Fishing season for anchovies will take place from April to August of the lunar calendar every year. Therefore, fish sauce which brewing started in this season will have a better taste and flavor.

Then brewing process will be either one of the two methods: in wooden barrels or in ceramic jars. Normally, fish and salt mix when brewed in wooden barrels will be fermented slower, but produce better taste and flavor. Wooden barrel brewing is not to dry or incubate the fish sauce directly in the sunlight, but only in the shade. This will allow the salt/fish mixture to be fermented to its fullest extent in about 12 months or more. When the fish meat is fully extracted into aromatic liquid, people will continue to filter with a special tool, the bamboo spigot. It is also because of this special traditional manual processing method that the people of Phan Thiet can still preserve the typical delicious taste of this region fish sauce.

See the article Fish sauce and other dipping sauces at: https://nuocmamtin.com/en/fish-sauce-and-other-dipping-sauces/ 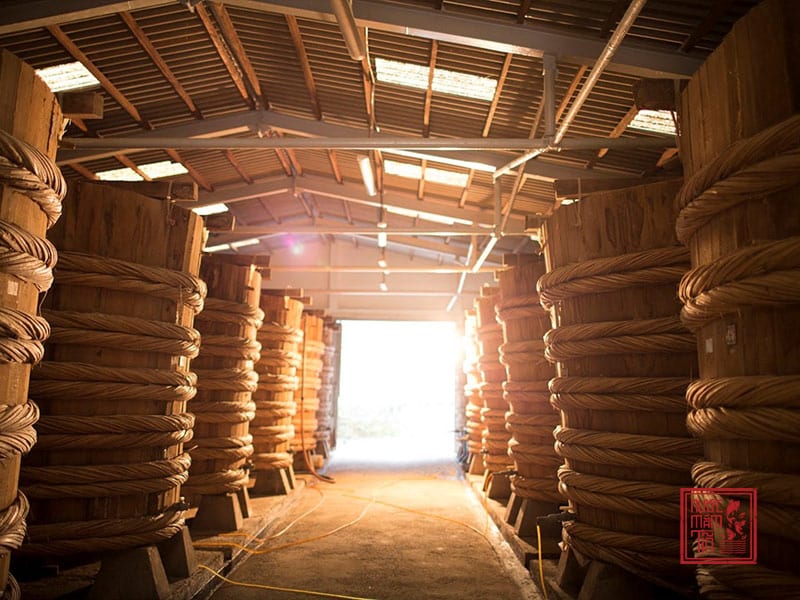 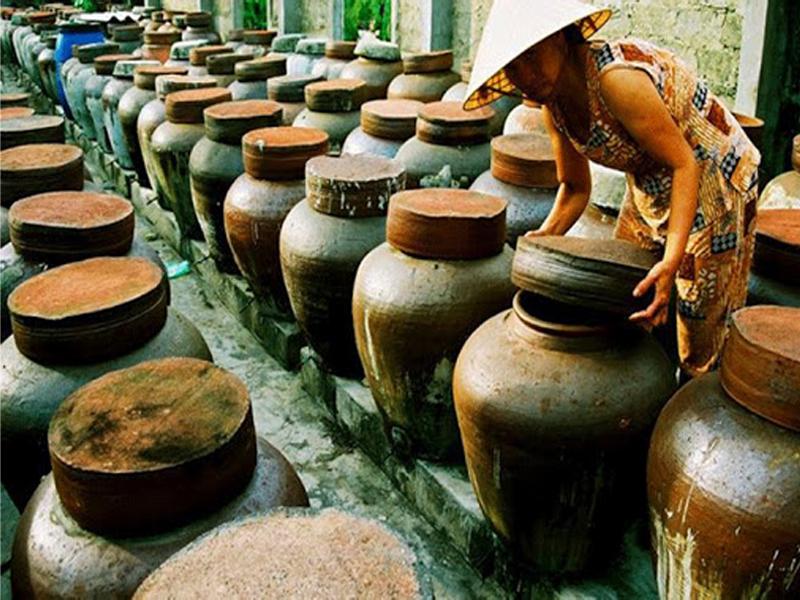 In addition, it is necessary to drain the water well to reduce the amount of water inside the barrels. In addition to that, in order for fish sauce to have a higher protein level, people will use the nitrifying method, which is using lilac water to make refill water and then pull out successively through many barrels of tents. thus, each barrel will add a few more protein.

There are many different ways to recognize original Phan Thiet fish sauce, but the simplest way is to look at the fish sauce appearance. Phan Thiet fish sauce color will have straw yellow to cockroach brown cockroach, in addition the liquid should be clear, smells nice, well done and light sweet after taste. Perhaps this difference comes from the process of brewing conditions with favorable conditions including low humidity and high temperature of the region which have a significant impact on the fermentation, and this can only be Phan Thiet town. 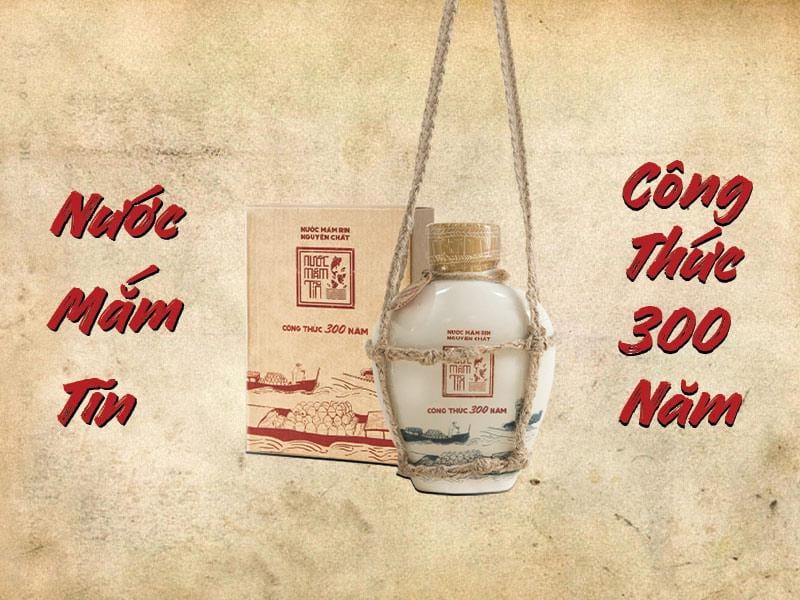 Currently, throughout Phan Thiet region, it will produce about 25 milion liters of fish sauce per year for the consumption market both at home and abroad. Phan Thiet fish sauce is also proud to be recognized by the Vietnam Record Book as the top 10 famous seasoning sauces in Vietnam, in addition, Phan Thiet fish sauce is now considered a meaningful gift to relatives and friends, when earthen ware pot was re-introduced as container for fish sauce which is back dated to hundreds of years. The brand is “Tin” fish sauce. It is produced in the same formula with the traditional 300-year practice. Its fish sauce quality is getting famous and guaranteed best and original these days in Vietnam.

See more The unique meaning of the name “Tĩn” fish sauce at: https://nuocmamtin.com/en/the-unique-meaning-of-the-name-tin-fish-sauce/